Все [19] Видео [8] Статьи [5] Фото [6]
FLEX
Журнал Flex. "Александр Федоров. Форма, которая потрясла мир бодибилдинга"
Alexander Fedorov remains a mythic figure. He is best remembered as the 6'1", 280-pound, 25-year-old behemoth who stunned the muscle world by holding his own in three-man callouts with Ronnie Coleman and Jay Cutler at the 2003 Russian Grand Prix. These are the 10 training principles that helped a skinny Russian kid expand into a legend. 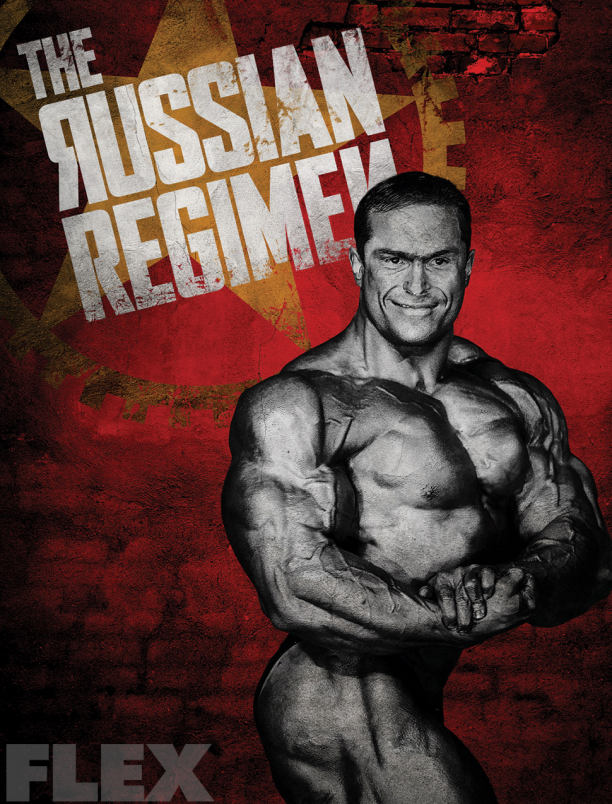 1. MODERATE In September 2003, while bench-pressing 485, Fedorov tore his right pec in four places. Because his chest was severely diminished during his six pro contests over the following three years, the injury had a monumental impact on his career trajectory. It also affected his training style. Gone were the workouts in which he strived to continuously push up more and more metal for low reps. “When I started training, I was always trying to use more weight with every workout,” he stated. “I was obsessed with getting stronger. That’s all that mattered to me. After the injury, I’ve been using much less weight and doing more reps. I almost always try to get 10 reps per set.”

2. BE UNIQUE Fedorov toiled in a gym created years earlier by his father and his father’s friends in an equipment building in a sprawling St. Petersburg cemetery. Most of his training knowledge he learned from his self-taught dad and from trial and error. This and Fedorov’s meager workout equipment led him to include several unique exercises in his routine. Let’s focus on four. Get the best supplements for your training goals at GNC Live Well >> CABLE LEG ADDUCTION - It’s rare enough for a male bodybuilder to do adductions with a thigh adduction/abduction machine. Lacking access to such a device, Fedorov, who was celebrated for his leg size, did these standing with a low cable attached to one ankle. Against the resistance, he pulled that straight leg from outward to just past parallel with the standing leg. HAMSTRING RAISE - Fedorov and his “Cemetery Crew” may not have invented this, but they discovered this rarity by themselves. The ham raise (aka the Superman) is performed on a back-extension bench set so only your calves are touching the pad. Then, while keeping your upper body in line with your thighs, lift yourself up to a perpendicular position by contracting your hamstrings. ONE-ARM LOW-CABLE ROW - When you don’t have access to modern back machines, you have to create your own exercises to target all areas of your lats. This is a one-arm, bentover row with a D-handle attached to a low cable. Fedorov did these sitting on the floor with one leg bent under him and the other forward, and he stretched far forward to target his outer lats. UNDERHAND SHOULDER PRESS - By doing overhead presses underhand with a shoulder-width grip, you place almost all of the focus on your front delts. By contrast, when your elbows are out at your sides for overhand shoulder presses, you work your anterior delts with your front delts. Fedorov often did these with a Smith machine.

3. STAY STRICT It wasn’t sloppy form that caused his pec tear. He toiled under the tutelage of his bodybuilder father from his first workout at age 13. So the younger Fedorov was always instructed how to perform exercises precisely. Whether using heavier weights and lower reps before the injury or moderate resistance and reps afterward, strict form has always been one of his core principles. “I want to make sure I keep the tension on the targeted muscles, so I always use proper form,” he said in 2005.

4. GET FREE If you read Fedorov’s training routine from top to bottom, you have to go all the way to the 15th exercise, the cable rear lateral, to find one performed with a machine. Mechanical exercises were limited to mostly legs and back, and even those were done with only the most basic machines, such as a hack squat or a lat pulldown. The cemetery gym was born in the dark days of the old Soviet Union, when St. Petersburg was still Leningrad. Forget the latest modern contraptions. The elder Fedorov felt lucky to have barbells and dumbbells and a bench or two. This ethic carried over to the younger Fedorov’s training even after the fall of communism, when he had access to more workout options. He still trained in the cemetery shed mostly with dumbbells. “I prefer free weights because of the freer range of motion,” he averred. “They make me work harder.”

5. DOUBLE UP In October 2003, Fedorov finished third behind Coleman and Cutler in the Russian Grand Prix. The next year, when Cutler didn’t compete, Fedorov was second to Coleman in the same contest. You might not think the Russian phenom, who barely spoke a word of English, and the American Coleman, 14 years his senior and then in the midst of his eight-year Olympia reign, shared much in common besides gargantuan size and those close contest placings. However, their training was remarkably similar, from their emphasis on free-weight basics for moderate reps to the ultra-hardcore gyms where they sweat to their double-split routines. When doing a double split, you train twice daily. Fedorov double-split three of his four training days (all but the day he trained quads). This allowed him to emphasize individual body parts by giving each its own workout.

6. SWITCH IT UP He has never been one to stick to the same exercises and techniques for workout after workout. Instead, he regularly switched up all sorts of variables, including exercise selection, exercise order, rep schemes, and intensity techniques. “I never do the exact same workout for a muscle that I did the time before,” he said. “I don’t want to have the same results, so why would I do the same workout?”

7. SPLIT YOUR LEGS Many bodybuilders split their thigh training into separate quadriceps and hamstring sessions. The argument for doing so is simple. These are both large body parts and are crucial to contest success. Furthermore, if you hit hams after quads in the same workout, you may not have the energy and intensity to give both sides of your legs the barrage they need to grow. Fedorov carried the leg breakup as far as possible by putting three days of rest between sessions for quads and hams. This is especially significant because the one thing even his toughest critics conceded about him during his 2003–06 pro years is he had superb legs. His hamstrings from the side were arguably the greatest of all time. And he always gave hams their own 13-set session far away from quad day.

8. MAKE UNILATERAL DECISIONS During five of his seven workouts (biceps, hamstrings, back, triceps, and quadriceps), Fedorov did an exercise that worked his left and right sides separately. To do this, he even incorporated the aforementioned unique exercises, one-arm low-cable rows and cable leg adductions. “Whenever possible, I want to include an exercise that lets me fatigue each of my two sides alone,” he stated. “Your left and right sides are never exactly the same in terms of strength, so if you include a one-arm or one-leg exercise, you knw you can push each side to failure during those sets.” Get the best supplements for your training goals at GNC Live Well >>

9. SUPERSET SHOULDERS He switched it up when he hit delts. His shoulder workout consisted entirely of supersets. Each of his three superset combinations was focused on a different deltoid head. Dumbbell front raises paired with underhand shoulder presses targeted his front delts. Dumbbell side laterals coupled with medium-grip upright rows worked his medial delts. Both of these duos had the added benefit of pre-exhaustion because he did an isolation exercise before a compound exercise. Finally, cable rear laterals teamed with bentover dumbbell rear laterals hit his rear delts.

10. AIM HIGH At 25, Alexander Fedorov met and even surpassed his goal when he held his own with Ronnie Coleman and Jay Cutler in his pro debut. But his career appeared to end disappointingly just three years later. Now, at 36, he's returning to the pro competition circuit. After eight years away from the stage, he will be pleased to make the posedown. But he’s aiming higher. What fueled his workouts this year is the one thing in the IFBB Pro League that has, so far, eluded him, the one thing that would redeem a career that started with an explosion of hype but then fizzled. That one thing? Victory. FLEX
0 0 0 0